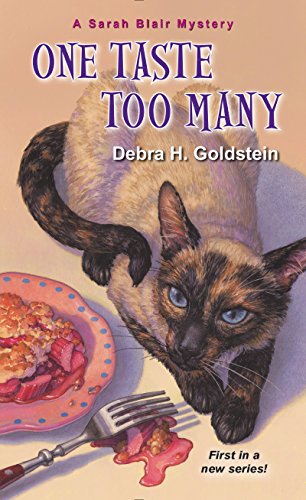 “One Taste Too Many” is the first book in the new Sarah Blair series by Debra H. Goldstein. I have to say that I am thrilled to have discovered it! Goldstein has scored a home run with main character Sarah, who is a caring woman with common sense who approaches cooking with a philosophy of “the quicker and easier, the better”. If you love those catering queen heroines…fear not! Sarah has a twin sister who is a professional chef, so there’s plenty of good cooking information.

Goldstein also did something pretty unusual in the cozy genre with her (minimal) romance storyline. I won’t say more to avoid spoilers, but if you’re tired of the usual, give this book a try!

Sarah spends most of this book trying to clear her sister’s name of a murder charge, and fighting to keep custody of her beloved Siamese cat. Both twins, as well as certain key supporting characters, have distinct and well-thought-out personalities, with plenty of room to grow as the series progresses. I will be first in line to see what happens next!

I had heard that the reveal of the killer came as a surprise to other readers, so I went in looking for a twist. I got one! Until very near the end (when the clues are becoming much more obvious), I had NO IDEA of who the killer was. (I will refrain from sharing my excellent outside-of-any-cozy-box theory. It was so far off, it would take this review into the realm of comedy.)

Another excellent aspect of this book is that fact that Sarah actually takes pro-active steps to gain information to help her find the killer. Then she takes time to think through what she’s learned before deciding what to do next. Once all is revealed, everything makes perfect sense. Basically, this is everything you could want in a cozy mystery (with a couple of fabulous extras thrown in).

Five out of five big chunks of my favorite sharp cheddar!