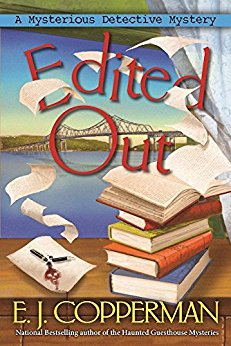 “Edited Out” by E.J. Copperman provides a unique twist on the cozy mystery genre. The protagonist, Rachel Goldman, is a mystery author. The over-arching premise of the series is that a man claiming to be Duffy Madison, her main character, appears in her life. In addition to solving the current mystery in which she finds herself involved, Rachel must try to figure out who the man claiming to be a fictional character actually is, all while trying to finish writing her current book.

What makes this book so enjoyable is first person narrator Rachel. She tells the story, but also speaks directly to the reader, and she is hilarious! For example: “Women were not put on this planet to be buffers between men. It’s a side service we sometimes offer while we plot our takeover of the world. Go ahead. Assume I’m kidding.”

In addition to Duffy and Rachel, the minor characters are also well-drawn and full of potential. I look forward to the next installment in this series; I’m eager to see what mystery our main characters are confronted with next, to gather more clues to Duffy’s true identity, and to hopefully learn more about the backstories and personalities of Ben (police investigator) and Rachel’s father.

The story itself is well-paced and cleverly plotted. It is a bit reminiscent of old-school detective stories, as Duffy and Rachel interview witnesses, gradually gathering more and more information (and misinformation) about the case. I enjoyed this aspect of the book; in many cozies, the heroine spends most of the book going about her life, occasionally coming across some clues. In “Edited Out”, Rachel is actively (if reluctantly) trying to solve the mystery.

Another aspect of “Edited Out” that I found interesting was the information that Rachel shares about being a writer. During the course of the book, she talks about deadlines, editors, agents, writer’s block, and her writing process. This is never overwhelming, and the reader doesn’t feel like the book has suddenly transitioned from a mystery to “How To Be a Writer”. However, what Rachel shares about her career comes across as insightful and relevant.

Side note: Other reviewers have said that this book can be read as a stand-alone. I can’t honestly address this, as I had already read book 1, “Written Off“. That being said, I think that a reader could pick up “Edited Out” and figure out what was going on fairly quickly. However, I’d recommend starting with the first book, both for continuity of storyline and for the more detailed character development provided.

I highly recommend this book to fans of cozy mysteries. I also think that fans of traditional mysteries would enjoy this story, as it provides a significant amount of focus on trying to solve the crime. Anyone looking for something unique would also find “Edited Out” a worthwhile choice.